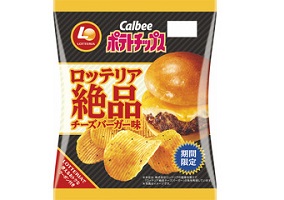 This is the second collaboration between the two firms, following the launch of Calbee’s Kappa Ebisen (a prawn flavoured snack) and Lotteria’s Ebi Burger (a prawn burger) that went on sale this January.

According to sources, the new crisps feature the classic flavour of Lotteria’s cheeseburger, described as “salt & peppered juicy meat finished with cheddar and gouda cheese”.

The 73g pack will go on sale between August 3rd until mid September from convenience stores across Japan, price at around ¥150 JPY ($1.21). A coupon within the pack also offers a promotion on a Lotteria cheeseburger meal.