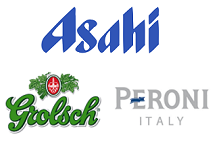 Leading Japanese beverage maker Asahi Group Holdings is planning to make an offer to buy European beer brands Grolsch and Peroni, according to reports in Yomiuri and the Japan News.

In November, it was reported that AB InBev was giving consideration to a disposal of Peroni and Grolsch in order to head off possible competition concerns over its takeover of SABMiller.

A deal between Asahi and AB InBev for the brands could be worth as much as ¥400 billion ($3.41 billion), which would make it the biggest oversesas acquisition ever by a Japanese company after Kirin Holding’s ¥330 billion ($2.81 billion) deal to own subsidiary Australian beer maker Lion Nathan in 2009.

According to the Japan News, Asahi Group Holdings is keen to establish a foothold in Europe, where its presence is weak. In December, it was also reported that Asahi was seeking to expand in North America with the potential acquisition of Talking Rain Beverage.