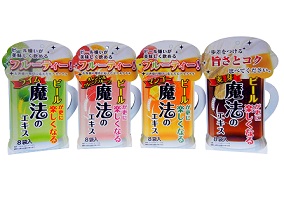 Japanese foods producer Ajigen has  launched its new Magic Extract powder – a product designed to be used to add flavour to beer.

Ajigen Magic Extract – labelled “makes beer more delicious” –  is set to be rolled  out at the start of December and follows last year’s launch by the company of a seasoning powder for ramen noodles.

Sold in a pouch, the product comes in three fruit-flavoured varieties – mango, lime, and grapefruit & orange – as well as a malt flavour that is said to intensify the flavour of beer, giving it a more well-rounded character.

Ajigen Magic Extract will be sold in eight-packs for a price of 350 yen (US $3.05). Each individual packet is said to hold enough powder to mix with a 350ml  can of beer.