Japan: Acecook launching instant noodles to be eaten with beer 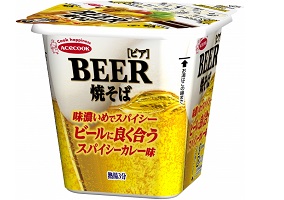 Instant noodle giant Acecook has announced the launch of a new instant noodle product that it is designed to be consumed alongside beer.

Launched in time for the summer months, Acecook Yakisoba (stir fried egg noodles) is said to be aimed at introducing a new audience to instant noodle products.

Claimed to have “spicy curry flavour that is good with beer”, Acecook Yakisoba is said to feature round noodles with a strongly flavoured sauce. Pots are described as containing “extra” sauce, blending curry with pork, chicken, garlic and onion flavours, in addition to dried toppings of cabbage, onions and red pepper.

Tags
Acecook
← PREVIOUS POST
UK: Iglo Group to be sold to Nomad Foods
NEXT POST →
Germany: Henkel in the running to acquire Wella from P&G – reports