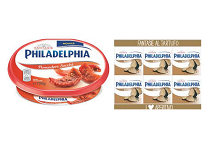 Philadelphia Fantasie with Truffle contains a truffle and mushroom mix and is designed to be added to pasta and rice dishes to impart a traditional flavour. Philadephia Fantasie with Sundried Tomato is described as “tasty sundried tomatoes meet the fresh creaminess of Philadelphia” and is recommended as a spread or as an ingredient in cooking.