Israel: Carrefour in talks to enter market with Victory investment 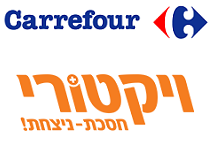 Carrefour, the world’s second largest grocery retailer, is seeking to enter the Israeli market through an investment in the Victory supermarket chain, according to a report in Bloomberg.

Talks about a potential investment, which were reportedly confirmed by the Israeli firm following media speculation, come as Victory itself is planning to submit a bid for Alon Blue Square’s troubled Mega Supermarket chain in order to strengthen its presence in the near $9 billion Israeli retail market. Israel’s second-largest grocery chain  Rami Levy Chain Stores Hashikma Marketing 2006 has also said it would look t0 submit a bid for Mega, Bloomberg reports.

The reported move by Carrefour comes as France’s largest retailer reported strong performance over the 2015 financial year, with sales rising 3.0% on an organic basis to €76.9 billion ($85.6 billion). The company reported “faster growth in Europe, notably in Spain and Italy” while it also touted an “excellent performance in Latin America in a more difficult environment”. Growth in recurring operating income rose 7.0% to  €2.445 billion ($2.72 billion) at constant exchange rates, with Carrefour saying that all countries in Europe, including France, had posted an increase in their operating margin.