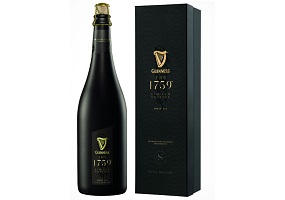 Diageo is exploring new possibilities in the luxury market with the launch of the first entry in its Guinness Signature Series™.

The new launch, called The 1759™, is described as a limited edition ultra-premium beer made with both beer malt and whiskey malt. Said to be inspired by a 200 year old recipe, the “rich amber ale” offers “new style and flavour” and is aimed at fine dining and gifting occasions.

“Today, the expectations of beer connoisseurs and enthusiasts are significantly higher”, Guinness Brand Director Doug Campbell said. “Guinness® The 1759™ has flair, from the sleek aesthetic of the bottle design to the stylish black velvet lined gift box through to its unique flavor and combination of ingredients. Those who have come to love Guinness know we always aspire to go beyond their expectations with each new product release, and this exclusive beer will not disappoint”.

The name of the edition is said to come from the year in which Arthur Guinness signed the 9,000 year old lease at St. James’s Gate in Dublin so he could start brewing its own beer.