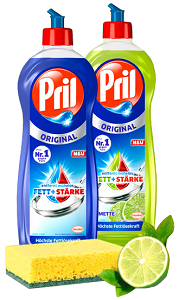 This week Gama takes a look at at the novel “starch-removing” claim being made by Pril Fat & Starch Dish Detergent, a new product line recently launched by German manufacturer Henkel.

Promising to “effortlessly remove fat and starch”, Pril Fat & Starch is a reformulation of Henkel’s existing Pril dish detergent in Germany. Identifying that much of the effort in manual dishwashing relates not only to the effects of grease and fat but also to dried or baked-on residues, the company has developed a special enzyme-enhanced formula designed to make it easier to tackle encrusted dirt. According to Henkel, the active enzymes have the effect of breaking down the molecules in starchy foods such as potatoes, pasta and rice, making it possible to tackle difficult pots and dishes without “tiresome scrubbing”. Clearly setting much in store by this latest innovation, the company has updated 7 of its 9 primary Pril SKUs with the enzyme-based formula.

Henkel’s enzyme-based approach makes it, perhaps surprisingly, something of a pioneer in the hand dish detergent category. The phenomenon is discussed in a 2013 article by bioinnovation company Novozymes, which reports that many companies have been slow to latch on to the possibilities of enzymes in dish soap, even when their use is already well established in other categories such as automatic dish detergents and laundry products. This is despite research that, it says, demonstrates that enzymatic solutions reduce soaking time and the need for scrubbing by 50% versus conventional formulations.

According to Novozymes, the first major company to break cover with an enzymatic formula was P&G, which used the approach in its Dawn Power Clean line launched in the US in 2012. Featuring “micro-scrubbing enzymes that power through all types of food messes”, it promised “the power of an overnight soak in just 5 minutes” but – unlike Henkel – did not make specific reference to starchy residues.

Compared to automatic dish detergent, over time hand soaps have become much the poorer relation when it comes to cleaning innovation. Arguably, producers have eschewed manual products as a lower-value category with lesser growth potential. Alternatively, in terms of encrusted dirt, there may have been a gap in expected and actual consumer behaviour: just as with automatic dishwashers, consumers washing by hand do not necessarily do so immediately, allowing dirt to become dried-on and therefore more stubborn.

Despite a rise in the use of automatic dishwashers worldwide, the need for manual options is unlikely to drop off any time soon. Younger and less affluent consumers, as well as  those in developing economies, remain a key market for the category. By addressing the need for greater cleaning power, brands such as Dawn Power Clean and Pril Fat & Starch could potentially provide the spark that leads to a revitalisation for hand dish soaps, with a renewed focus on innovative formulations and product efficacy.