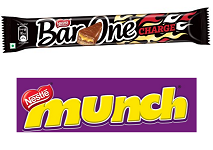 Food multinational Nestle is seeking to expand in the chocolate space in India with new launches from its global premium portfolio and the launch of new varieties of existing products, according to a report in the Economic Times.

Among the products slated for launch are a new Trio variety of the firm’s leading Munch branded chocolate wafer bars, and a new version of its Bar One confectionery bars called Charge, the latter featuring “a yummy new Nougat Taste” and a “soft and malty caramel and nougat filling”, according to company information

In addition to the new launches, Nestle is also said to be relaunching its Alpino chocolate brand, including a “premium” European range.

The revamp is intended to build on existing growth. Nestle’s India’s chocolate business, which accounts for 12% of the firm’s total sales, increased 1.8% in the last 6 months, according to a company spokesperson quoted by the Economic Times.