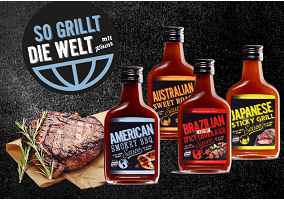 Unilever has unveiled a new line of Knorr barbecue sauces for the German market under the Grillsaucen Der Welt (Barbecue Sauces Of The World) name.

The products are recommended as a dip, a marinade or as an accompaniment to grilled meats and are said to have been inspired by the barbecue tradition in Australia, Brazil, Japan and the United States. The line comprises an Australian Sweet Roast Sauce, said to give meat a sweet smoky flavour; a Brazilian Spicy Churrasco Sauce with red chilies; Japanese Sticky Grill Sauce, said to have a sweet and sour taste with soy sauce and ginger; and an American Smokey BBQ Sauce, described as having malt and smokey notes and recommended with grilled chicken.