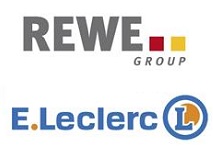 The German supermarket chain Rewe has announced that it has finalised a strategic alliance with its French counterpart E. Leclerc “to identify synergies in the context of the business activities of the two companies and to leverage these to mutual benefit”.

This alliance is designed to act not only a purchase association but also as a partnership in other areas, including “strategic topics such as the further development of the organic products segment, cooperation in the travel and tourism segment, in import as well as in the areas of electric mobility and energy”.

Commenting on the move, Michel-Edouard Leclerc and Alain Caparros, CEOs of E. Leclerc and Rewe respectively, said: “The Management Boards of the two groups have exchanged their views on these subjects and discussed the options to develop common strategic directions and to leverage synergies, notably in the area of procurement of both companies. In view of the major alliances that have been newly established in European retail, we have therefore come to the decision that we will jointly take advantage of every possibility to improve the growth opportunities of our two groups”.

In order to establish the new alliance, Rewe announced it would be leaving the CORE alliance that includes the Swiss Coop chain as well as the Belgian supermarket Colruyt and the Italian retailer Conad by the end of the year.