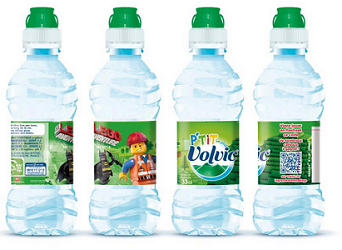 In an attempt to broaden its target market, Danone is launching new versions of its classic Evian and Volvic water brands targeting children, LSA reports.

New to the Volvic stable is P’tit Volvic. The product is being released in partnership with the film Lego The Great Adventure with the aim of bringing greater visibility to the launch. Characters from the film feature on the product packaging.

Meanwhile the Evian brand is being extended to include a new version bearing images from the Mr. Men series. As part of the launch, Evian has devised a new character known as Mr Glouglou to promote the importance of hydration. A dedicated marketing website has also been created featuring games and activities as well as the chance to win prizes.

Both products are being launched in a 330ml sports cap format.