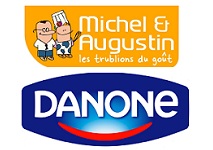 Danone, the French multinational, has announced that it has entered into exclusive negotiations to acquire a minority interest in food and drinks firm Michel et Augustin, alongside Artemis and Michel et Augustin’s founders.

Launched in 2004, Michel et Augustin  markets a range of biscuits, dairy products, fresh desserts and beverages. The firm’s sales in 2015 totalled around €40 million ($44 million), “a steep rise from 2014”, according to a Danone press release.

The deal would be the first by Danone Manifesto Ventures, Danone’s corporate venture capital unit that was created to support the development of innovative companies with high growth potential.