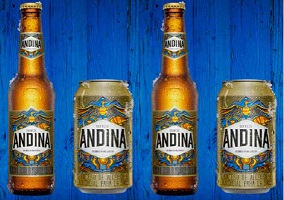 Central Cervecera de Colombia (CCC), a joint venture aimed at tapping demand for beer and malted drinks in Colombia, has announced the launch of a new brand called Andina and has also revealed plans to start producing international beer brands in its new plant.

The CCC joint venture was formed in 2014 by Chile’s Compania de las Cervecerias Unidas (CCU) and Postobon, with the intention of investing in a new plant and securing a 15% share of the Colombian beer market.

Andina is described as a locally-produced lager beer with 4% abv. It is being manufactured in CCC’s newly-opened brewery in Sesquile, in the province of Almeidas, which was built with an investment of $400 million

In an interview with El Tiempo,  CCC president Mauricio Medina, revealed that other beer brands that are currently imported into Colombia, including Heineken and Molson Coors brands, will start to be produced in the new plant.

The Sesquile factory has been operating since January and has a production capacity of 3 million hectolitres per year.