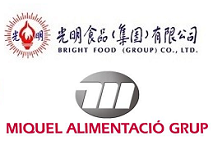 The deal is set to proceed subject to approval by the Chinese authorities and an EU anti-monopoly review.

Under the terms of the deal, the remaining 28% of the Spanish firm will be held by the national sovereign fund China Investment Corp, which teamed up with Bright Food Group, and a Chinese food distributor.

“Teaming up with the national sovereign fund and a powerful domestic distributor makes this overseas acquisition different from our previous deals […]”, said Ge Junjie, vice-president of Bright Food Group. “The partners will help Bright better integrate our global distribution platform with the domestic businesses”.

The deal, which is expected to bring Spanish water, oil and meat products to China, is to be completed in September. The name of the national distributor has not been unveiled.