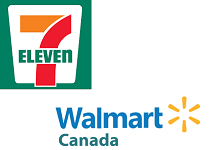 Retail chains 7-Eleven and Walmart Canada are partnering on a  pilot e-commerce pilot project in the Toronto area, according to a report in the Canadian Grocer.

Under the scheme, consumers placing orders at www.walmart.ca will be able to have their orders delivered for pickup at one of six 24-hour convenience stores operated  by 7-Eleven.

The “Grab & Go” project is also said to be an extension of Walmart’s ‘locker service’ which is currently available at Walmart’s head office and a number of stores in the Greater Toronto Area and in Kapuskasing, Ontario. The service allows Walmart customers to collect goods they have ordered using a six-digit code that remains valid for seven days.

The Canadian Grocer also notes  that the new move is one of a number of attempts by Canadian retailers to use established bricks and mortar locations as collection points for goods ordered and bought online.”

The pilot project will run for six months at 7-Eleven’s stores in Brampton, Burlington, Toronto, Mississauga and Vaughan.