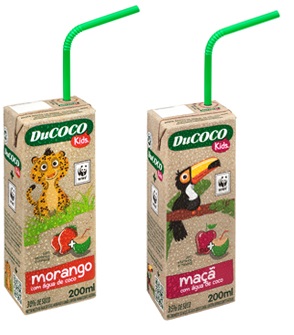 In Brazil, Ducoco Alimentos e Bebidas, the manufacturer of the brands Ducoco and Menina, has launched a new line of coconut water targeting kids, a product described as the first of its kind for the country.

The coconut water drink, a blend of coconut water and fruit juice, is sold in 200ml cartoons and is available in three flavours: strawberry, apple, and pineapple & grape. It is claimed to be free from preservatives and artificial colours and to be high in potassium, vitamins, and minerals (A, C, E, B3, B6, B9, B12, and zinc).

As part of the launch, Ducoco has established a new partnership with WWF Brazil to help develop habitat conservation projects for well-know and endangered Brazilian species such as the toucan, jaguar, golden lion tamarin monkey and the blue macaw.  Ducoco will donate a portion of its profits to the charity, while pictures of the animals are featured on the front of each carton of the product.