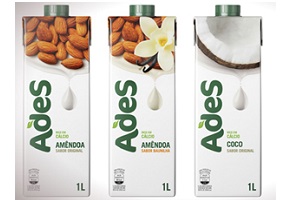 Soft drinks firm Coca-Cola Brasil has expanded its portfolio of dairy alternative drinks in Brazil with the launch of new plant-based beverages under the AdeS brand.

A year after buying the AdeS business from Unilever, Coca-Cola Brasil said it was launching the new products to cater to consumers looking for alternatives to animal milk that also contained a source of calcium.

The new lineup of plant-based milks comprises Almond, Vanilla Flavoured Almond. and Coconut. Meanwhile the original AdeS soy drink has been reformulated and now contains 23% more soy extract than before.