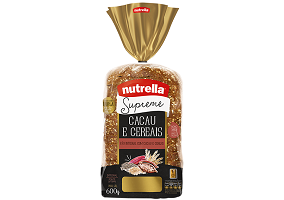 As part of its Nutrella Supreme branded line of nutritionally-enhanced breads, bakery giant Bimbo has unveiled a new sliced loaf named Cereals & Cacau in Brazil, according to an article in Giro News.

Nutrella Supreme Wholegrain Bread with Cereals & Cacau is promoted as high in fibre and is said to combine sweet and savoury flavours. Sunflower seeds, oatflakes and oatmeal are listed among the ingredients alongside whole and fortified wheat flours.

The new product will replace Bimbo’s existing Nutrella Supreme Fibre Plus product and is now on sale in supermarkets and bakeries in the South, Sao Paulo and Rio de Janeiro states of Brazil. The 600g pack comes with a recommended price of R$10.99 ($3.40).