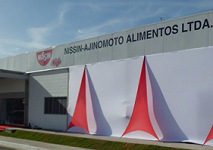 Seasonings firm Ajinomoto has announced that it sold its stake in Nissin-Ajinomoto Alimentos, a Brazilian joint venture established between itself and fellow Japanese firm Nissin, to Nissin Foods Holdings.

The sale of the 50% stake, which is reportedly valued at R$1 billion ($270 million), is set to be concluded by the 30th October 2015. According to sources, the move means Nissin-Ajinomoto will now become the wholly-owned subsidiary of Nissin Holdings.

The move comes as Ajinomoto shifts its stragetic focus to other areas of the food industry. In a statement, the company explained that it had been aiming to accelerate its growth in the Asian and South America markets, focusing mainly on processed and frozen foods and, as a result, had decided to move away from its interests in the instant noodles category.

According to data cited by Giro News, Nissin-Ajinmoto is the largest instant noodles player in Brazil, holding 63% market share. The company is present in the sector through the brands Nissin and Cup Noodles.