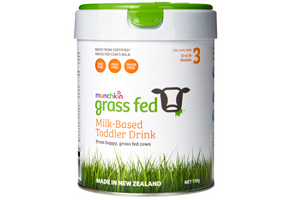 US-based infant and toddler products firm Munchkin has launched its first formula, claimed to be made from milk produced only by 100% grass-fed cows, for the Australian market.

The launch comes after the California-based firm struck a deal with New Zealand dairy producer Synlait to launch grass-fed formula milk in Australia and China.

According to a report in InsideFMCG, the grass-fed cows that supply the milk are raised in New Zealand where they can graze on pasture for 365 days of the year. Each dairy cow is described as being milked a maximum of two times every 24 hours, and the resultant milk is said to be certified GMO free, grain free and rBGH free.

Commenting on the launch, Munchkin regional sales manager Gary Hunter said: “Most parents aren’t aware that formulas are typically made up of 65% milk or milk by-products, and therefore the quality of the milk is of paramount importance. Keeping our New Zealand cows on strict grain free diets of 100% grass and forage ensures that only the best milk goes into our grass-fed formula”.