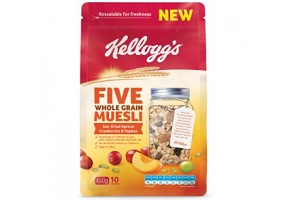 Claimed to be the “first muesli formulation on the market to contain the five whole grains – rolled oats, wheat, barley, triticale and rye”, new Five Whole Grain Muesli has been launched by global cereal manufacturer Kellogg’s in Australia, according to a report in Australian Food News.

According to Kellogg’s, the product’s “75 per cent whole grain formula delivers a high fibre recipe that provides 16 per cent of an adult’s daily fibre needs and 70 per cent of their daily whole grain target in one 45 gram serve”.  Additionally, the new muesli “[is] minimally processed, contains no artificial flavours or colours, is low in salt, and the sugar comes from the fruit pieces”, the company claims.

Featuring added spices such as cinnamon together with apricot, cranberry, seeds, nuts and coconut slivers, Kellogg’s Five Whole Grain Muesli is offered in a choice of two flavours: Sun-dried Apricot, Cranberries & Pepitas,  and Roasted Almonds, Coconut & Flame Raisins. The product is being made available across Australia at an RRP of A$4.49 ($3.46) for 450g.