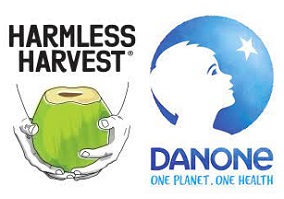 French dairy multinational Danone has announced it has acquired a majority stake in Harmless Harvest, a US business offering coconut-based drinks and yoghurt, through its corporate venture arm Danone Manifesto Ventures (DMV).

DMV first invested in Harmless Harvest in 2017 as part of a $30 million capital growth round.

Founded in 2009, Harmless Harvest is described as a leader in the fast-growing premium coconut water category in the US. It also launched dairy-free yoghurt alternatives in 2019 and 2020.

According to Danone, the deal will contribute to the company’s goal to increase its plant-based sales worldwide to €5 billion ($ 5.91 billion) by 2025.

Commenting on the acquistion, Danone CEO Laurent Marcel said: “It has been a privilege to be part of the Harmless Harvest success story over the past few years, as the company has continued to grow, innovate, and pioneer more responsible business practices”.

“We are thrilled to further the partnership with a group of people who aim to be harmless to the planet and society and share our vision of a healthy and sustainable food system”, he added. “We look forward to continuing our partnership with Ben and his talented leadership team, and supporting their inspiring ambitions”.

Harmless Harvest co-founders and chairpersons Justin Guilbert and Douglas Riboud said: “DMV has played a critical role in Harmless Harvest’s success since 2017, not simply from a capital perspective, but most importantly in an outstanding operational and strategic capacity”.