UK: Bimbo to launch its first own branded range of products 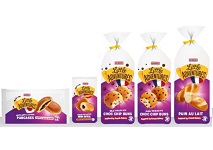 According to Tim Barkey, marketing director of Grupo Bimbo, the new Bimbo Little Adventures brand range was developed to tackle the lack of “innovation, inspiration and variety” among existing products.

“As the leading bakery company worldwide, operating in many countries across the globe, we are in a strong position to bring the expertise we have developed and flavours we’ve experienced back to the UK,” Mr. Barkey said.

UK: Bimbo to launch its first own branded range of products - Gama