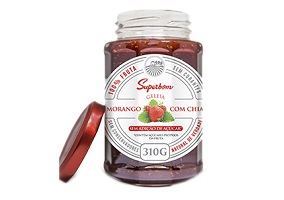 Superbom, a Brazilian producer of health-oriented foods, has announced new product launches for 2017, including jam with chia seeds and 100% fruit juice.

According to a statement released ahead of the APAS tradeshow , the company is intending to introduce a range of 100% fruit jam with no added sugar and also a line of 100% fruit juices.

The new range of Superbom Jam include the varieties Strawberry with Chia and Red Fruit with Chia, as well as Grape, Guava, Apricot and Blackberry.

Commenting on the launch, Superbom marketing manager David Oliveira said that the fruit used was rigorously selected “ resulting in a product full of flavour, with low calorie content”.

“Another important point of difference is the flavours that come with chia, a first for mass market jams”, he added

Superbom Fruit Juice, meanwhile, is available in the varieties Apple, White Grape and Antiox, presented in 1l glass bottles, whilst the jam is available in 310g glass jars.

Both new ranges are claimed to be free from added sugar, preservatives, artificial colours and flavours.