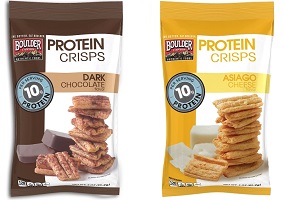 Inventure Foods, a natural crisps and snacks firm, has entered into the functional food segment with the launch of Protein Crisps under the Boulder Canyon brand.

Featuring pea and lentil proteins, Boulder Canyon Protein Crisps are available in two flavours: Dark Chocolate – which is said to have a balanced chocolate flavour that doesn’t make it overly sweet – and Asiago Cheese – which is described as having a light cheese flavour.

“We know that snack foods are playing the largest role they’ve ever played in today’s diet, so we felt the time was right for a delicious snack that offered a healthy boost of protein”, said Steve Sklar, senior vice president and general manager for Boulder Canyon. “I believe we have a winning recipe with our Protein Crisps, and we’re confident consumers will agree”.