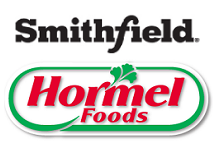 Meat and packaged foods firm Hormel has announced the sale of its Clougherty Packing business to Smithfield Foods, the world’s largest pork producer.

Clougherty Packing is the parent company of Farmer John and Saag’s Specialty Meats, whose brand lines include products such as ham, bacon, sausages and lunch meat as well as raw cuts of meat.

The deal, which was transacted for $145 million in cash, also includes Hormel’s PFFJ farm operations in California, Arizona, and Wyoming, the firm said.

Commenting on the move, Hormel president and CEO Jim Snee stated: “We appreciate the Farmer John, Saag’s and PFFJ employees’ dedication and commitment to their customers and consumers. While the businesses have performed well, they no longer align with our company’s growth strategies. This divestiture also allows for the integration of the pork processing facility at Farmer John with the majority of the live production operations which supply the facility, and are currently owned by Smithfield. We will work together to ensure a smooth transition for our employees and customers”.