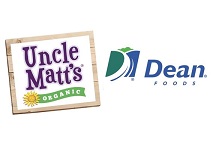 Dean Foods, the food and beverages company, has announced the sale of Uncle Matt’s Organic Brand to Harmoni.

Founded in 1999 by Matt McLean and sold in 2017 to Dean Foods, the juice brand Uncle Matt’s Organic is now being sold to a company created by its founder as well as a team of investors.

“If you told me three years ago after selling to a publicly-traded, multi-billion-dollar CPG leader that I’d buy Uncle Matt’s Organic back out of bankruptcy, I wouldn’t have believed you,” commented McLean.

Mclean said: “When Dean’s financial distress took a saddening and unfortunate turn, it became a rare opportunity for us to purchase Uncle Matt’s to expand distribution, innovate into new categories, and educate consumers on the intrinsic health benefits of buying organic”.

The financial terms of this deal were not disclosed.