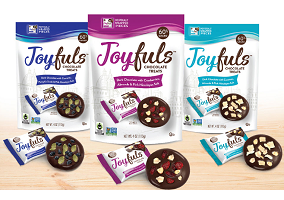 US consumer goods company Halen Brands is launching a line of health-oriented chocolates called Joyfuls into mass market channels, according to a Foodbev report.

The new chocolate brand, which claims to be inspired by an artisan form of confectionery called mendiants, is claimed to be made from ingredients certified as happily sourced, non-GMO and fair trade.

According to the company, the new line is aimed at consumers “who are calorie-conscious but wish to indulge from time to time” and will be available at mass retailers such as Costco. The individually wrapped packaging is said to help control portion size and simplify the sharing process, while also making the product portable.

Commenting on the news, Halen Brands chief executive officer Jason Cohen said: “At the end of the day, people love dessert, they love chocolate and we’re trying to give you a best-in-class approach to eating an indulgent snack. Joyfuls to us is a better-for-you experience because we’re using high-end ingredients and we’re individually wrapping them so you can quantify how many calories you’re having”.