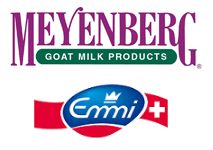 It has been announced that California-based fresh goat milk firm Jackson-Mitchell is to be acquired by Swiss dairy company Emmi, in a move that will further the latter’s interest in what describes as “an attractive market”.

Jackson-Mitchell produces Meyenberg branded products, including what is claimed to be the only nationally distributed fluid goat milk in the USA, and generates annual sales of nearly $30 million.

Commenting on the deal, Emmi executive vice president Matthias Kunz said: “Goat’s milk is in high demand and short supply in the US, but it is also a very challenging product as a result of its highly seasonal nature. We hope that Meyenberg’s excellent relations with goat’s milk farmers in California, Idaho, Kansas and Missouri will result in opportunities for both of our Californian goat’s milk processors, Cypress Grove and Redwood Hill Farm & Creamery, and that we will be able to even better meet the growing demand for these products as a result”.