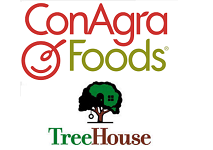 North American packaged food firm ConAgra Foods has confirmed that it is to dispose of its Ralcorp private label operations, having entered into a definitive agreement to sell the unit to TreeHouse Foods.

The deal is worth approximately $2.7 billion in cash, excluding transaction-related expenses.

Under the terms of the agreement, ConAgra Foods said it would divest the vast majority of its private label operations, including a network of 32 manufacturing facilities in the US, Canada and Italy. The company added that it would retain certain private label operations with a strong connection to its existing consumer foods business, specifically canned pasta, cooking spray, peanut butter, pudding / gels, Gelit frozen pasta product offerings, as well as the HK Anderson and Kangaroo brand equity, trademark and business portfolios.

Ralcorp, which manufactures products such as  cereal, pasta, crackers, jams, syrups and frozen waffles, was purchased by ConAgra two years ago for $5.1 billion but has since struggled with profit margins and integration costs, Reuters reports.

Sean Connolly, ConAgra Foods president and chief executive officer commented: “The sale of our private label business marks another important milestone as we remake ConAgra Foods into a focused, higher-margin, more contemporary and higher-performing company. This transaction will enable ConAgra to sharpen our focus and resources on our Consumer Foods and Commercial Foods segments as we continue to move quickly to drive sustainable growth and deliver enhanced shareholder value”.