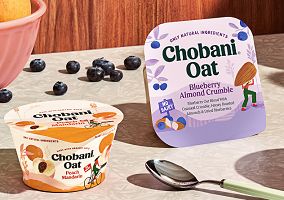 Chobani, the second-largest yoghurt maker in the US, has announced the launch of a new oat-based range as it expands its offering in the non-dairy space.

Called simply Chobani Oat, the new line will include oat-based yoghurt, due for launch next month, and oat-based milks due for launch in January next year.  It is also launching a “barista blend” product designed to behave like steamed whole milk in coffee and tea.

Commenting on the launch, Chobani founder and CEO Hamdi Ulukaya said: “Like yogurt, oats are an ancient food with deep roots in our culture and our land. These grains deserve to be celebrated. I always knew our journey from yogurt to becoming a modern food company would be through nutritious, delicious, batch-made products like Chobani Oats, and today they’re helping us further deliver on our founding mission of making better food for more people“.

Chobani initially ventured into the realm of dairy-alternative products with an array of coconut-based offerings, launched earlier this year.

The news of Chobani’s entry into oat-based dairy alternatives comes on the same day that PepsiCo announced it would be discontinuing its own Quaker Oat Beverage line less than a year after launch, according to a Food Business News report.