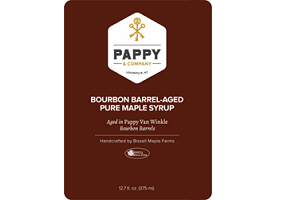 Bissell Maple Farm has announced that it is to launch Pappy & Company Bourbon Barrel-Aged Pure Maple Syrup for the US market.

The new syrup is described as being aged in 23 year-old barrels that have previously been used to distil Pappy Van Winkle Bourbon in order to obtain a gourmet version which “transcends pancakes and waffles”.

Louise Van Winkle Breen from Pappy & Company said: “There are other barrel aged syrups out there, but to know the story behind this syrup, it being the best quality possible combined with the most iconic bourbon brand of our time, we know we have something rare and very special to offer”.

Nate Bissell of Bissell Maple Farm added: “You might think you know these flavours—the bourbon, the maple. They’re really ‘of the moment’ right now with kitchens and chefs…but you really can’t know the richness and depth of flavor until you’ve tasted our Sugarmaker’s Reserve syrup that’s been aged in a 23-year-old barrel from the most exclusive bourbon available”.