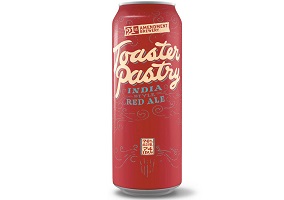 The owners of the company reportedly came up with the idea after signing a lease for space in a factory that had previously been used by cereal maker Kellogg’s.

According to a report in the magazine People, the launch is one of a growing number of breakfast and beer tie-ups that include products such as craft brewer Fulton’s Hefe Wheaties, which is modelled on General Mills’ Wheaties breakfast cereal, and Colorado Brewery’s Count Chocula flavour beer which is being relaunched this year.

“We wanted the first new beer out of the brewery to be a tribute to the former space”, the owners told The Huffington Post through a spokesperson. “After brainstorming well-known Kellogg products, we all agreed that a Pop-Tart-inspired beer was the direction we wanted to take”.

“It’s a hoppy beer with a bitter finish, but it contains malts that give a crust-like flavor in the beginning, followed by hops with tropical fruit to give a strawberry jam-like finish”, they said.