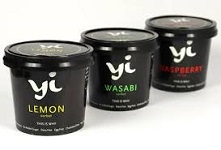 Edinburgh based dessert manufacturer Ronan Foods is due to launch a healthy range of iced desserts and sorbets in the UK.

Named Yi, the new line is designed to be the first of a “free from” range that lacks of many potential allergens and artificial or unhealthy ingredients, including lactose, saturated fat, gluten, nuts, and cholesterol.

Described as being suitable for allergy suffers vegans, diabetics and vegetarians, the new range was developed in collaboration with Michelin starred chef Chris Horridge. It is being launched in flavours such as Wasabi Ripple, Raspberry, Chocolate, and Wasabi Lemon and Lime, with more flavours expected to be added soon. The Yi Iced desserts have already been well received well by chefs and food critics alike, it is claimed.

Jim Mullins, managing director of Ronan foods, said: “Our team of highly trained experts has discovered that eliminating additives from our Yi iced desserts and sorbets enhanced the natural flavours.”

“The Yi iced range is totally natural and extremely versatile,” he continued. “The products can be used as a starter, as part of a main course or as a dessert.”