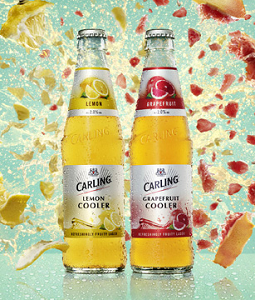 Molson Coors, owner of the Carling brand, is developing its presence in the flavoured alcoholic drinks with the nationwide UK launch of Carling Fruit Coolers.

The new drink, available in Lemon and Grapefruit flavours, is described as a light and refreshing choice, made with a blend of real fruit juice and Carling lager. Sold in packs of 4x300ml bottles, the drinks have 2% ABV and are aimed to appeal drinkers who prefer a sweeter taste.

Commenting on the launch, Carling brand director Jim Shearer said: ”Following on from the great success of Carling Zest and recognising that consumer lifestyles are changing with lighter, flavoured products in huge demand, we trialled Carling Fruit Coolers last year”.

“They were incredibly popular so we are rolling out Carling Fruit Coolers nationally this summer”.