UK: Kendamil to launch ice cream made with infant formula 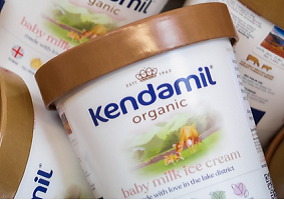 UK-based baby milk company Kendamil has released what it describes as the world’s first’ ice cream made with infant formula.

The limited-edition product has reportedly been designed for adults to counter the perception that infant formula tastes fishy, metallic, sour or bitter.

“We are proud to launch the first-ever ice cream made with formula milk,” said Ross McMahon, CEO and founder of Kendamil. “We have worked passionately with the finest local farms and suppliers to develop the only British-made infant formula that’s kinder to babies and the environment”.

“Given the surprising statistic that a third of parents have never tried their baby’s milk, we thought we’d bring it to them and let grown-ups in on the goodness with a world-first product made especially for them this summer”, he added.

The ice cream is claimed to be vegetarian-friendly and free from gluten, palm oil, and fish oil.