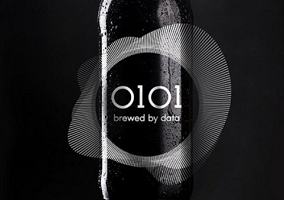 UK-based beermaker High Peak Brew has announce the launch of 0101, a new craft beer based on ‘big data’ that is claimed to offer the taste of “joy & optimism”.

The result of a collaboration between the brewer, customer engagement company Hava Helia and technology firm IBM, the beer was reportedly developed by analysing the ‘happy’ moods of partygoers over the New Year season with the help of IBM’s Watson platform.

According to a report in Food & Beverage News, the top 10 beers that matched each of the most shared New Year emotions on social media were identified and further analysed to identify their most common ingredients. 0101 Beer was brewed on back of the analysis, which revealed that among the common ingredient in beers associated with ‘happy’ emotions was honey, along with the hop varieties Nelson Sauvin and Hallertauer.

Steven Bennett-Day, executive creative director at Havas Helia, said: “We wanted to use data and technology to interpret something abstract such as positive feelings and emotions and turn it into an experience. We thought what could be better than a beer that lets you drink in the optimism of the New Year?”.