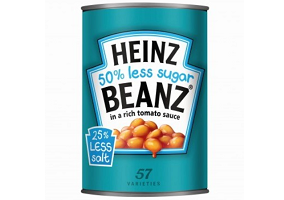 Heinz is to launch a new stevia-based low-sugar version of its canned baked beans in the UK, according to a report in Talking Retail.

The stevia-sweetened product will reportedly contain 50% less sugar than standard Heinz Baked Beans and will replace the existing reduced sugar & salt variety, which boasts a 30% reduction in sugar compared to the regular version.

Available from May, the new variety aims to meet consumer interest in healthier alternatives and will also retain the 30% reduced salt claim currently featured on the reduced sugar & salt product, according to sources.

Rachael Barnes, brand manager at Heinz Beanz, said: “It was really important for us as a company to respond to the growing concerns around health and nutritional values within products. Mums in particular are growing increasingly concerned with what they offer their children and our new Heinz RSS Beanz range will offer them the reassurance that what they are providing their families has improved nutritional benefits. By using the natural sweetener Stevia, we are able to reduce the sugar content whilst still delivering a tasty product.”