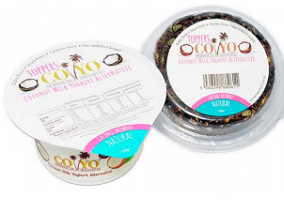 Co Yo, a UK producer of coconut milk yoghurts, has launches a new line of products called Co Yo Toppers, according to a report in FDIN.

The new product line is said to combine plain coconut milk yoghurt with a separate portion of “artisan”toppings and come with a spoon included so it can be eaten on the go.

Reportedly designed as “a breakfast [or] post-gym pick-me-up”, the new line is initially selling in a variety that comes with a topping of flaked coconut, raw cacao, pumpkin and sunflower seeds.

Commenting on the launch, Co Yo founder Bethany Eaton said: “The Toppers range is a UK first and has been introduced so UK consumers can purchase the popular split pot format as a dairy-free option. Each one has a handy spoon on the lid too, so CO YO can be enjoyed on the go. The new range will tap into surging demand in both the Food-To- Go and free-from categories, allowing CO YO to continue its record growth as Britain’s most loved coconut milk yoghurt brand”.