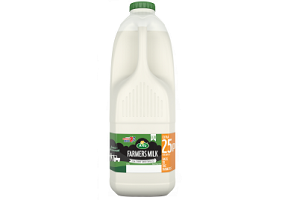 The UK division of Danish dairy firm Arla has announced the launch of Arla Farmers Milk, a new product that “give[s] shoppers the opportunity to pay a little extra on each bottle to help Arla farmers”.

Arla Farmers Milk is being made available in Asda stores in semi-skimmed and whole milk varieties, selling at an RRP of £1.20 ($1.60)  for four pints – 25p ($0.33) more than the Asda branded equivalent. This extra 25p will be returned and shared directly among Arla’s 12,700 farmer owners in line with Arla’s cooperative’s principles, the company said.

Commenting on the move, Arla Foods farmer board director Jonathan Ovens commented: “The launch of this new milk is a great boost to our dairy farmers.  People want to know more about where their food comes from and who benefits and are willing to pay more if they know it goes directly to the farmers that produce it. As we’re part of a cooperative, the money we receive goes back to the farmers who supply our milk. With farmgate milk prices much lower than we would like, we thank Asda for the continued support of our cooperative principles and also for providing an opportunity for their shoppers to give something back to Arla dairy farmers”.