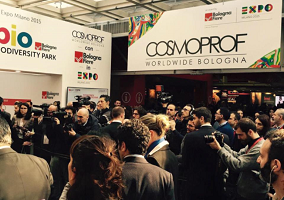 Almost 2,500 companies assembled inside the halls at Bologna Fiere in March as Cosmoprof, the self-styled “international leader in the global world of cosmetics”, returned to Bologna for its latest edition.

The show trumpeted record exhibitor and visitor numbers: almost a quarter of a million attendees packed inside the shows’ pavilions over the four days of the event, a fifth more than had attended the previous year. 79,000 of these – a 30% increase on the previous year – came from outside Italy, a fact that served to “symbolize the international leadership of the event” in the eyes of the organizers. Many companies that Gama talked to spoke positively of the business opportunities available, and also seemed broadly optimistic in view of the improving economic outlook across Europe.

On the show floor, the range of products on display proved as diverse as ever, although certain long-standing trends – most notably the natural & organic concept – continued to set the tone.

Read more about Cosmoprof in the March issue of Gama News.