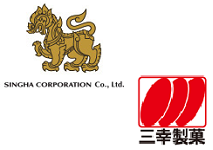 Singha, one of Thailand’s leading food and beverage firms, has announced that it has entered a joint venture with Japanese rice cracker maker Sanko to expand into the  snack market.

According to a report in the Bangkok Post, the move forms part of Singha’s plan to become one of the top five food and drinks firms in South East Asia by 2020 and aims to boost the popularity of rice crackers to the same level as potato snacks. The new venture, Singha Sanko Co, was set up with an investment of 250 million THB ($7 million).

Hironori Sato, president of Sanko Seiko, a Thai unit of Sanko, said: “It’s the first time we have expanded our business internationally. We will use Thailand as the springboard to expand to the ASEAN market”.

The company is aiming to take about a 30% market share in the snack market the first year, with further plans to expand into Cambodia, Laos, Myanmar and Vietnam by the end of next year. Over a five year period, the company is targeting 1 billion THB ($27 million) in sales

The first brand to be launched by the venture is Yuki, a snack that comes in the flavours Original and Snow Milk, both sold in 13g, 28g and 57g pack sizes.