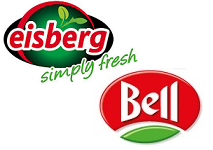 Swiss meat firm Bell Group has announced that it is acquiring the Eisberg Group, a manufacturer of salad leaves for retail and foodservice channels, as it look to expand further into the fresh produce sector.

Eisberg employs around 400 staff and generates annual revenues of more than 55 million CHF ($56 million). The company specialises in the production of fresh leaf salads and prepared salads and has production facilities in Switzerland, Poland, Hungary and Romania. In the retail space, the company sells a number of lines of bagged salad under names such as Mild Sensations, Crunchy, Passion, Southern Flavours and Tender.

Bell Group said that the deal would strengthen its convenience salads product segment and also solve capacity bottlenecks in Switzerland. Internationally, the group would be able to exploit additional potential for growth through Hilcona’s great expertise in the fresh convenience food sector, the firm added.

The acquisition is Bell’s second of 2016, with the company announcing last month that it would be acquiring the Austrian poultry firm Huber Group.