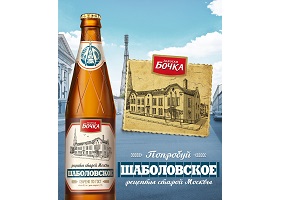 Efes Rus has launched a new beer under its Zolotaya Bochka (‘Golden Barrel’) brand name that is reportedly designed to recall the Soviet era.

Named ‘Shabalovskoe’, the beer is described as being made according to a traditional recipe from Soviet times. The design of the bottle and the label, developed by a branding agency, is aimed at evoking a sense of the early twentieth century.

According to the manufacturer, the beer is made from “light and caramel malt, hops, corn and rice,” and “creates a rich and bright taste with characteristic hoppy flavour”. Efes Rus tried to reproduce the original technology of beer production from the Soviet Brewers and “imagine how they think and work”. according to a press release.

“This beer was made especially for Muscovites, who are proud of our heritage and nostalgically refer back to the Soviet era”, commented Roman Anikeyev, Innovation Manager at Efes Rus.

The product will hit shelves in July 2015.