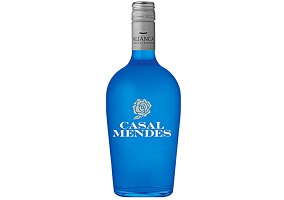 Alianca, a firm producing wines from across Portugal, has launched what is said to be the first ‘blue wine’ made by a Portuguese producer.

Described as a “wine based flavoured drink”, the product is reported to be based on the company’s vinho verde (‘green wine’), with natural substances added to give it its colour and light sweetness. The result is a refreshing drink, recommended for parties or the beach, according to sources.

Although a first in Portugal, Casal Mendes is not the first of its kind globally – Spanish firm Gik Live having launched its own ‘blue wine’ under the Gik banner in 2015. However, at around €2.99 ($3.34) per bottle, Casal Mendes Blue Wine is cheaper than Gik Blue Wine, which is typically retailed for around €10 ($11.15).

Casal Mendes Blue Wine is initally being sold at selected locations including Bacalhoa Vinhos stores and other wine shops.