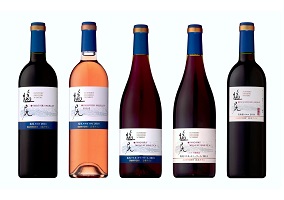 Wines from the new series are claimed to be made with 100% Japanese grapes, fermented at Suntory Shiojiri Winery. The “high quality” grapes used are  grown in the prefecture of Nagano, claimed to be one of the best wine-growing regions in the country. In launching the Shiojiri Winery series, Suntory said it was hoping to raise the profile of Shiojiri grapes as well as boosting Japanese wine consumption.

The new wines, offered in 750ml bottles, include Shiojiri Merlot and Shiojiri Merlot Rose, two types of Shiojiri Muscat Bailey and Iwadarehara Merlot, and they will be launched in Japan from September 5th 2017.