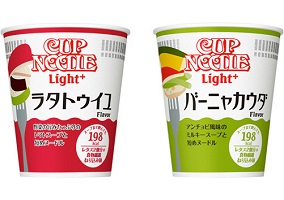 Dried noodle manufacturer Nissin Foods has announced that it is to launch a new range of instant cup noodles targeting health-conscious consumers.

Named Cup Noodle Light Plus, the new range is claimed to be rich in satiating vegetable ingredient but to contain only 198 calories per portion. According to Nissin, the noodles also contain 7g of fibre per portion, in addition to being half the length of conventional noodles in order to make them easier to eat.