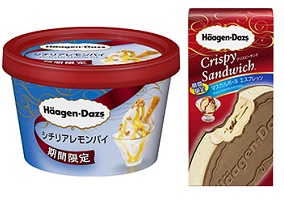 Haagen-Dazs Japan has recently announced that it is add two new limited varieties to its ice cream range in Japan for the summer months – Sicilian Lemon Pie and Mascarpone Espresso Crispy Sandwich.

Meanwhile the 60ml Mascarpone Espresso Crispy Sandwich (ice cream sandwich) is promoted as “having a perfect balance of richness and bitterness”: a “rich vanilla ice cream with mascarpone cheese, sandwiched with flavorsome vanilla coating and crunchy cocoa wafers”. Espresso coffee sauce is mixed into the mascarpone ice cream to give an added kick to the flavour, it is said.

Both varieties will be launched in late June, with the price of the Sicilian Lemon Pie variety standing at ¥ 294 ($2.45).