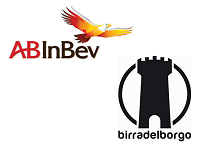 Birra del Borgo is one of Italy’s leading craft brewers and is based in Borgorose, 40 miles east of Rome. It produces a range of beers including pale ales, saisons and pilsners and has also released four seasonal beers as well as “bizzare” brews such as chestnut beer, spiced raspberry ale and a traditional Nordic-style oyster stout.

Commenting on the deal, Birra del Borgo founder and CEO Leonardo Di Vincenzo said: “The partnership with AB InBev will bring us many advantages, from technological improvements and access to scientific research to the possibility to grow from a commercial point of view. Moreover, this partnership also means that we will be able to focus much more on what we enjoy most and do best: creating and experimenting with exciting new beers and pushing the boundaries of beer evolution in Italy”.

Simon Wuestenberg, country director for AB InBev Italia, added: “We have been very impressed by what Leonardo and his team have built since 2005. They have been at the forefront of redefining beer in Italy, bringing a unique mix of inspired innovation, quality and consistency. Leonardo’s vision for beer and his passion for brewing will be great inspirations to our whole team, and we’re very excited about partnering up and growing together. As a challenger on the Italian market, we have been successfully developing our business with a great portfolio of premium and specialty brands in the last few years. Today, that portfolio becomes even stronger with some of the best of ‘Made in Italy’”.

AB InBev said it would provide the support to allow Birra del Borgo to expand its brewery know how and infrastructure, continue to innovate, and bring new beers to the market throughAB InBev’s strength in distribution.